College Board and ACT finally released a joint concordance for the SAT and ACT in the summer of 2018. The latest information can be found on our new Conversion and Concordance post. A detailed FAQ on what it all means for PSAT, SAT, and ACT Takers is also available.

How can PSAT scores help students determine whether the SAT or ACT should be favored?

The PSAT has long been thought of as a gateway to the SAT, but it can be just as useful in helping students decide whether to go with the ACT instead. Many students have already taken a practice ACT or an official PreACT that establishes a testing baseline. With PSAT scores now available, it’s smart to compare scores to see whether there is any clear advantage. Students who have not yet taken an ACT can invest the 3 to 4 hours required to take a practice ACT at a Compass location or from home via our online proctoring. For students unwilling to wait until December to receive their PSAT scores, a practice SAT with Compass is also an option. An added benefit is that our score reports provide far more detailed insights versus what is provided by the one received from College Board or ACT.

Compass has analyzed available research and concordances to create a comparison tool in both chart and table forms.  Although most students will find their PSAT and ACT scores intersect somewhere in the “Judgment Call” band, others will discover that one test or the other is a better fit. 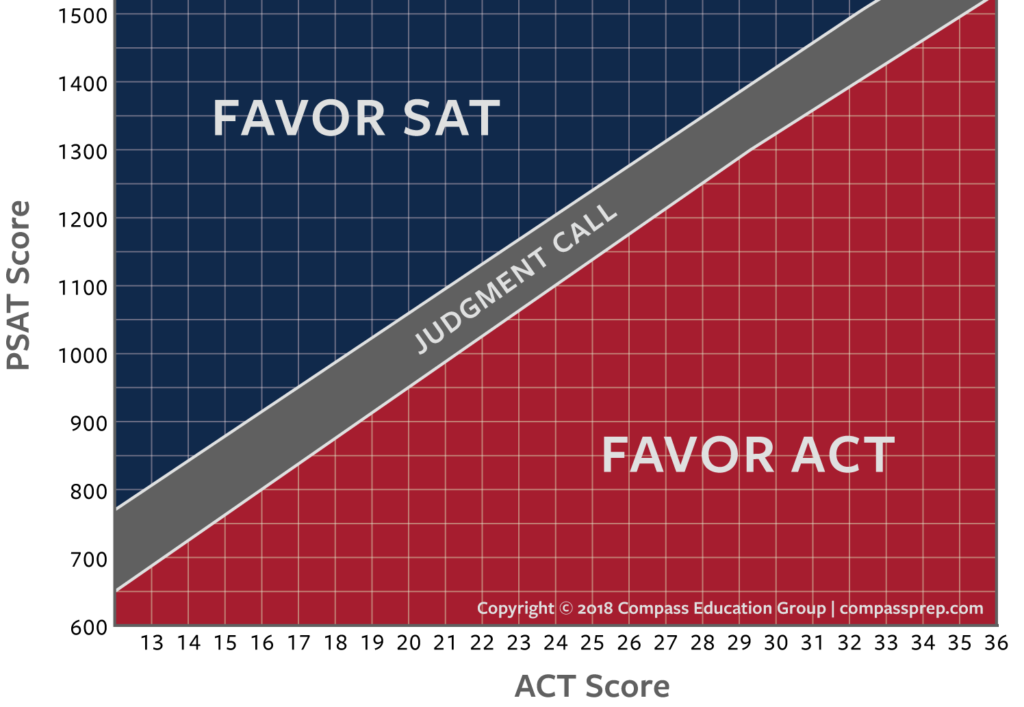 It is important to think about the relationship between PSAT and ACT scores as a range of options rather than as an all or nothing proposition. Concordance tables are used by colleges to compare SAT and ACT scores, so the tables are extremely useful to students when choosing which scores to send to colleges. Deciding which score is “higher,” though, is different from deciding which test will be better for you in the future. A PSAT or an initial ACT score is only a starting point. Most students will continue to build subject and testing skills. Students in the “judgment call” zone should think through the testing process before making a commitment. Which test dates will be targeted? Are there test areas or characteristics that make one exam more appealing than the other? What are the test preparation options for each exam? How does National Merit fit into the mix? Adam Ingersoll has written an excellent post on choosing between the SAT and ACT that outlines some of the factors students may want to consider. Compass directors are experienced in helping make those decisions.

Parents and students wanting a more in-depth discussion of some of the issues surrounding PSAT and ACT comparisons may find the questions and answers below of use.

How do concordances work for the PSAT, SAT, and ACT, and can they be trusted?

PSAT scores are placed on the same scale as SAT scores. The idea is that a 650 on the PSAT represents the same achievement as a 650 on the SAT. To the extent that PSAT and SAT scores can be used interchangeably, they can also share a concordance.

Why do no PSAT scores favor the SAT when compared to the highest ACT scores?

The PSAT is a test designed for sophomores and fall juniors. The material is slightly easier than that of the SAT, so the top SAT scores are not achievable on the PSAT—even with a perfect answer sheet. The PSAT score range extends from 160–760 (320–1520 total) versus the SAT’s score range of 200–800 (400–1600 total). In much the same way that no PSAT score can represent the same performance as a 1600 on the SAT, no PSAT score can be concordant with a 36 on the ACT (and a student with a 36 should stick with the ACT!). In fact, there are no scores on the PSAT that definitively favor the SAT over ACT at ACT scores of 34 and higher. A high scoring PSAT student with a 34 or a 35 may want to consider both tests, but the PSAT does not represent a difficult enough exam to make a definitive judgment. To give an exaggerated analogy, the PSAT is the golfing equivalent of a par 3 course—not challenging enough to measure the most elite testers/players. A full SAT might be recommended in those judgment call cases.

Are these comparisons valid for sophomores as well as juniors?

While the relationship between PSAT scores and ACT scores should be consistent, students are advised to be more guarded about making definitive decisions based on the sophomore PSAT. Most students hold off on preparation for the SAT or ACT until at least the summer before junior year—almost a full academic year after the sophomore PSAT—and students’ skill-sets can develop quickly in that period. Ideally, test comparisons are made on exams taken in the same timeframe. It’s a good idea to avoid, for example, comparing an October PSAT score with a practice ACT score obtained in June of the following year. At minimum, the time difference should be a consideration when weighing performance.