Build on Your PSAT Scores

Your PSAT scores are the start of your potential. Now save 10% when you reserve a spot in an online SAT or ACT prep class.

Compass has analyzed the October 2022 PSAT/NMSQT results to see how scores will impact the class of 2024’s National Merit hopes. Almost 1.5 million juniors took the qualifying exam for the National Merit Scholarship Program, and more than 54,000 of them will receive some form of honors or scholarships.

The Continued Drop-Off in High-Scorers
Students compete for National Merit honors. The more competitive the class, the higher the qualifying scores required (“cutoffs”). How well did students do this year? 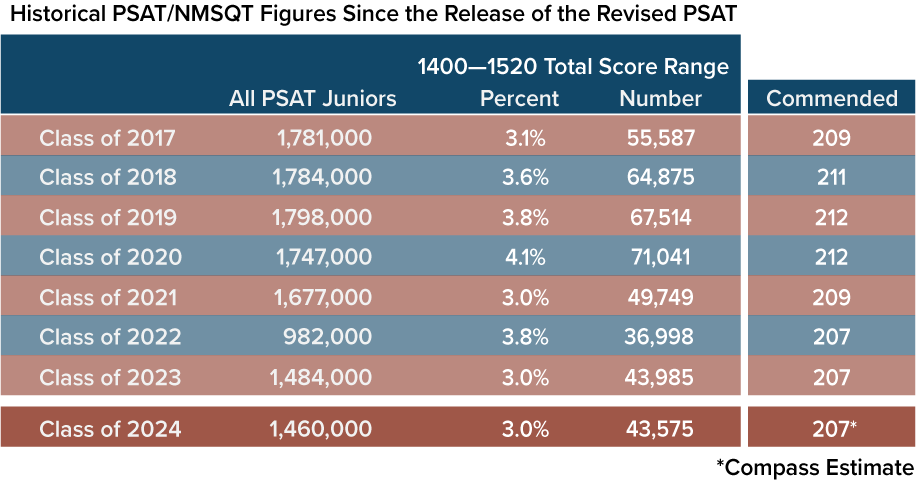 In the class of 2020, more than 70,000 students scored above 1400 on the PSAT. This year the figure is under 45,000. This year looks surprisingly similar to last year. Test taker volume is still off more than 13% from pre-pandemic levels, and only 3% of those testers achieved a top score. The results in the last two years may reflect pandemic-related learning losses. Alternatively, College Board has scaled recent PSATs more unfavorably than in the past. 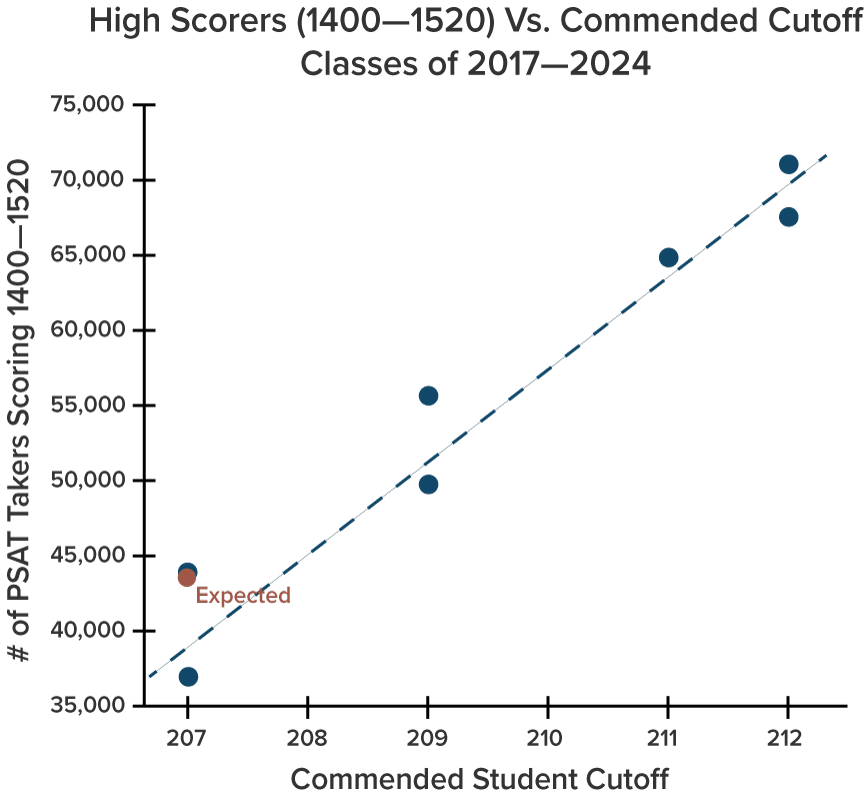 Consider the range
State cutoffs fluctuate from year to year — even when the Commended cutoff is unchanged! Rather than expecting that a single score is the correct estimate, Compass recommends that students consider the possibility that a state’s cutoff will fall within the estimated range. Over the last ten years, only 27% of Semifinalist cutoffs have remain unchanged from one year to the next. [Compass’s historical archive of National Merit cutoffs dating back to 2008 can be found here.] 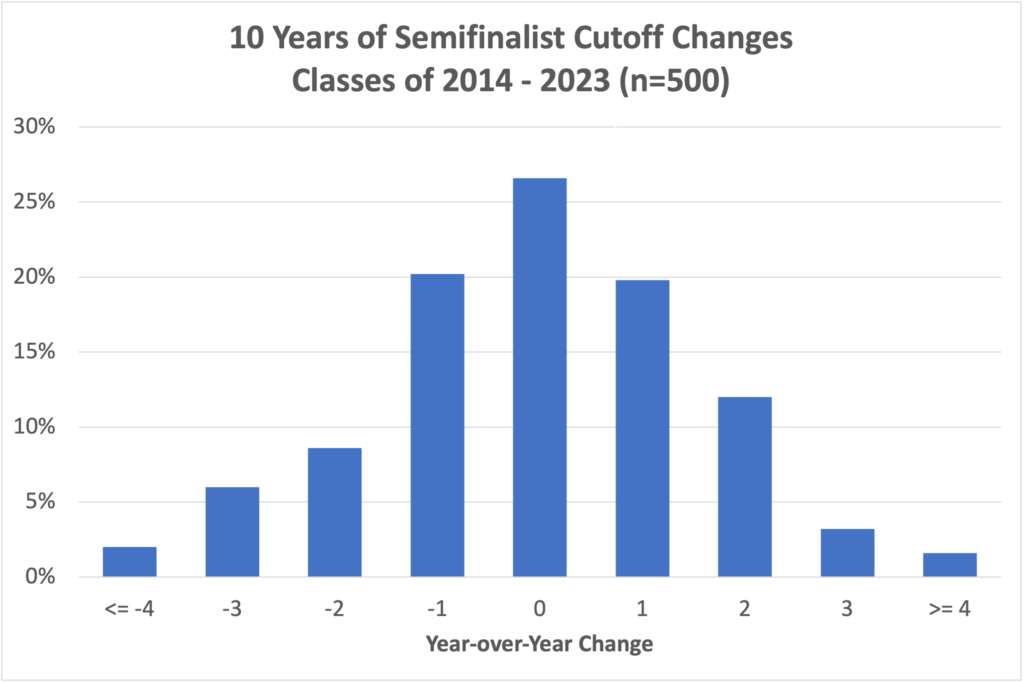 Compass projects this year to be more stable than most because of the similar national performance compared to the class of 2023. However, in Compass’s 15-year database, there has never been a year when the majority of state cutoffs remained the same. So while “no change” is usually the best bet one can make, it’s also a bad bet. Consider, instead, the estimated range. 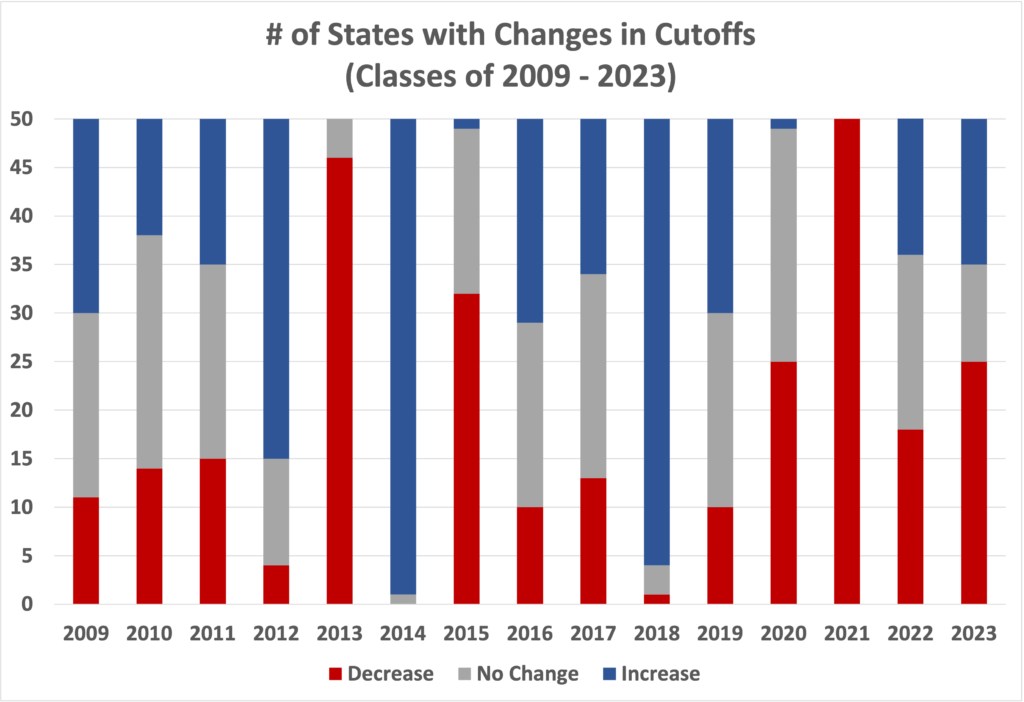 Small shifts can matter
It doesn’t always require a large change in testing behavior to cause a state’s cutoff to move. NMSC has no way of making fine distinctions within a state. Everyone at a given score is either a Semifinalist or not. The organization tries to come as close as possible in meeting the state’s allocation of Semifinalists (a number it does not directly report), but the nature of the Selection Index means that small variations can move a cutoff higher or lower.

Let’s assume that the target number of Semifinalists for a state is 300. If 282 students had Selection Indexes of 220 or higher and 315 scored 219 or higher, then 219 comes closest to meeting the target and will be set as the cutoff. If only 5 students at 219 had gotten 1 additional question right, there would have been 287 students at 220 or higher, and a 220 cutoff would have been chosen by NMSC. Small differences in class makeup, test form difficulty, or a few extra students guessing correctly on a problem can move the Semifinalist cutoff by a point.

When your selection unit is not a state
The Semifinalist cutoff for each of the 50 states is calculated independently. However, some cutoffs are not independent. NMSC considers boarding school students, students studying abroad, and students in the District of Columbia and in U.S. Territories or Commonwealths as separate “selection units” that follow specific rules. The net effect is that the cutoffs for the District of Columbia and students studying abroad are always set at the level of the highest state cutoff. The cutoff for U.S. Territories is set at the Commended Student level (as it is with some states). The cutoff for a boarding school is set at the highest state cutoff within the boarding school’s region.

The role of test scaling
The PSAT is usually taken by about 1.5 million students each year. The pool is (or was) large enough and consistent enough that the scores of the top 50,000 students should not change much. And yet they do. This reflects a shortcoming of the PSAT/NMSQT — it’s well-designed to measure the performance of the average student, but is more prone to error at the edges. College Board attempts to scale each PSAT so that a particular score represents the same level of achievement. In practice, we see clear examples of where College Board’s numbers are “off.” The class of 2021, for example, had an unusual test form that produced far lower cutoffs than in the previous year. Further confusing matters is that several different test forms are used each year. Compass’s analysis shows that this year’s PSAT — or at least the primary form, taken by more than 1 million students — was difficult. This difficulty can show up throughout the range of cutoffs, but lower scoring states tend to track the Commended level more than do the higher scoring states.

Updates and comments
Compass will update this post as new developments arise. We try to (eventually) answer all questions in the comments, but please be aware that comments are moderated and will not display until approved.

Take $10 off your AP Checkpoint Assessment or AP Spring Practice Test when you sign up by December 10th. Enter code: 10BY10 at checkout. For more information and to register, click here.